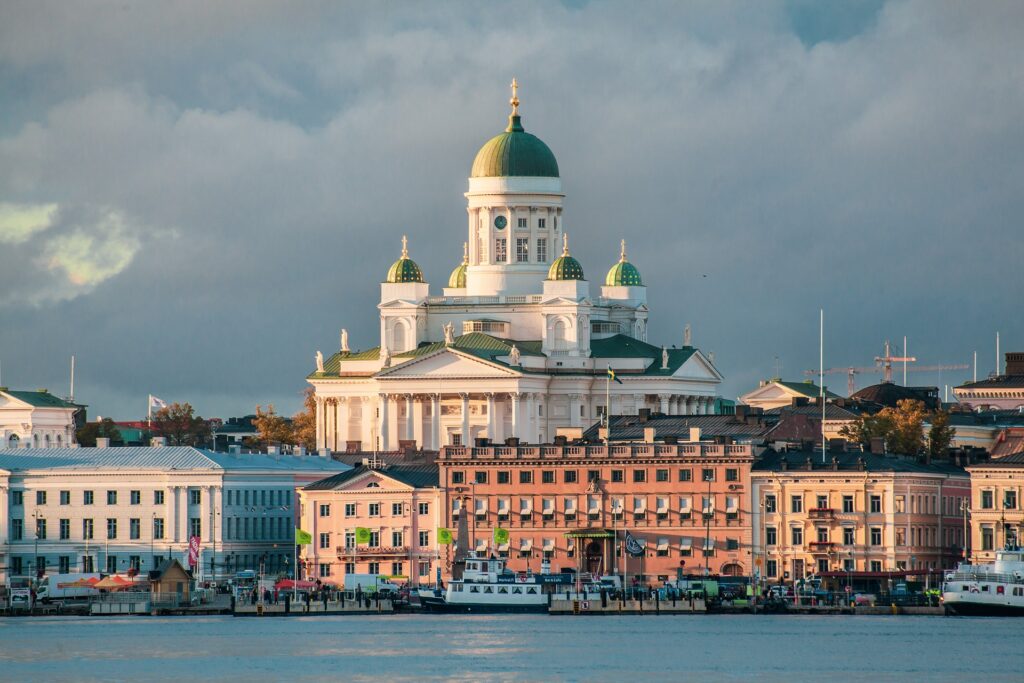 Let’s be honest, if you follow the news it’s quite easy to become overwhelmed by the sheer volume of negativity around at the moment. Whether it’s the cost-of-living crisis, economic fears, droughts or governmental leadership issues, there’s a lot of pessimism across the globe. However, fear not. According to the World Happiness Report, there are a number of places around the world where the outlook is significantly brighter. Find out below which destinations rank highly in the list of happiest countries for contractors to work.

The first of the Nordic countries to appear on this list, Finland has one of the best education systems found anywhere on earth, trailing just behind South Korea, Japan and Singapore. Teachers require the minimum of a Master’s degree and the country places an emphasis on experiential learning above quantitative testing, which seems to play a key part in it taking first place in the Happiness Index. Winter swimming, a popular Finnish pastime, is also credited as playing a big role in the nation’s collective happiness. It might take some getting used to, but if you’re working in Finland it’s probably worth a go, judging on their position in this list.

Denmark scores well in all of the criteria, including life expectancy, social support and support for charity, but it also places a major focus on the development of renewable energy, economic stability, work-life balance and civic engagement. More broadly, it’s suggested that the Danish population’s closeness to nature and access to green spaces and woodland is a key factor in their happiness.

A highly popular tourist destination, it’s suggested the financial meltdown in 2007 and subsequent collective regeneration may have played a part in Iceland’s overall satisfaction. While tourist rates haven’t detracted from its ranking on this list, it’s suggested that Icelanders’ ability to escape the city to a countryside that resembles another planet also contributes. Icelanders also appear to have a stronger confidence in their fellow citizens than other nations.

Democracy is king in Switzerland and everything is put to vote including the number of immigrants the country should accept per year, down to public infrastructure and health issues. This provides a sense of freedom and ownership over its collective direction and means that Swiss citizens have a level of involvement unrivalled almost anywhere else on Earth. This has also led to a strong social fabric, according to the report, although contractors working here beware; it also warns that the Swiss aren’t known for their overt friendliness, which can be off-putting to first time visitors.

According to a 2013 UNICEF report, happiness begins early in the Netherlands, with Dutch children being ranked as the happiest in the world. Although that level drops off by the time they reach adulthood, it’s not by much, with the country still being listed as the fifth happiest globally. Social cohesion levels are high in the Netherlands with 85% of children having breakfast with their parents in the morning, which according to the aforementioned UNICEF report is a sign of positive wellbeing. Interestingly, the country also ranks highly in GDP per capita, social generosity and perceived low levels of corruption.

Small but mighty, Luxembourg’s robust social security system designed to support its residents post retirement pushes the country up the happiness rankings. Citizens also benefit from excellent wages and a first-class healthcare system. While geographically one of the smallest nations on earth, Luxembourg punches significantly above its weight with a number of major firms drawing contractors here.

Sweden’s relatively high COVID mortality rate has pushed it slightly down the happiness rankings however it still ranks in the top ten, in part due to a very high GDP per capita. Sweden also scores exceptionally well for gender equality with companies obliged to offer 16 months of paid family leave that can be split between parents along with free day-care. Swedish employers also put a significant focus on work-life balance which naturally pushes happiness ratings higher.

Norwegians are probably fairly happy because their country scores highly in almost every quality-of-life index and GDP rankings globally. Norway scores highly in all areas with citizens left supported by an effective government welfare system and a booming economy built on a foundation of smart use of its natural resources, and an enormous sovereign wealth fund. As discussed in our other blogs, Norway is an outstanding place to work as a contractor, although some basic language skills may be required.

Climbing up into the top ten from twelfth last year, Israel is one of the most technologically advanced countries in the world and was the first nation to effectively vaccinate its population against COVID, which significantly boosted public confidence in the government. Israel has a very low mortality rate and is known as one of the healthiest nations in the world, which also contributes to its populations’ happiness.

The final country to make the top 10 is New Zealand, where Prime Minister Jacinda Ardern has taken a central place on the global stage in recent years. For a relatively small country, this is significant and highlights New Zealand’s position at the forefront of global social issues. In 2019, for example, Ardern introduced a ‘wellbeing budget’ which included programmes aimed at improving mental health, lowering child poverty and helping native peoples. The country also benefits from being one of the most naturally beautiful places in the world and is a draw for both tourists and contractors – who don’t mind the long-distance flights – alike.