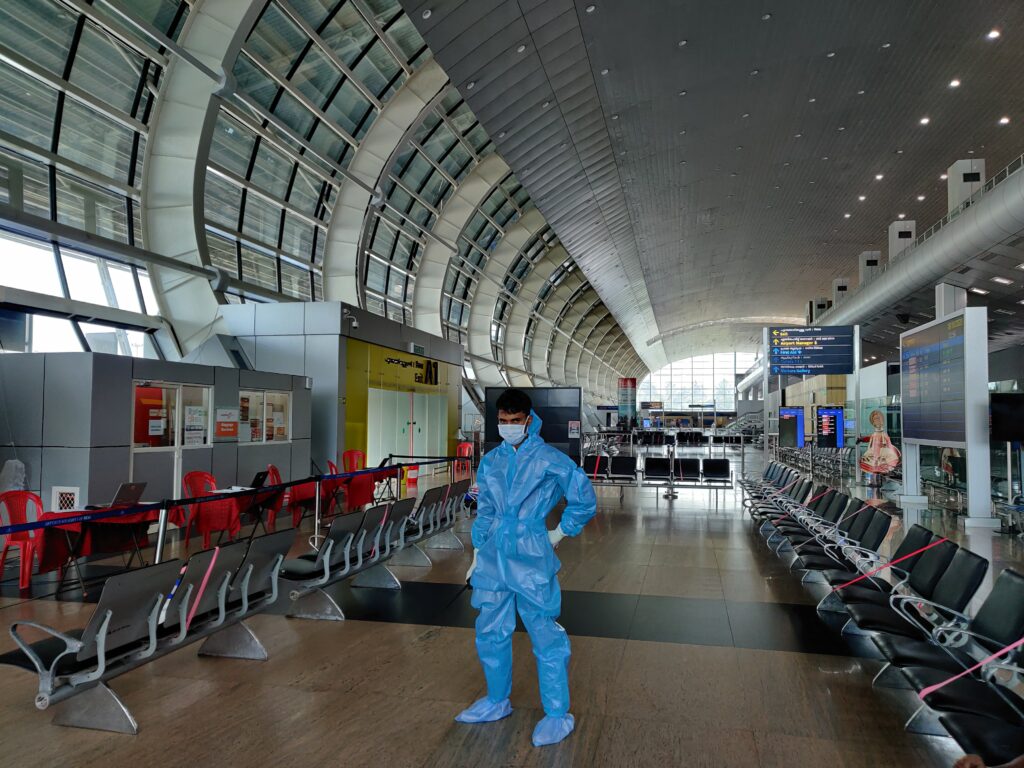 Just when we thought that we had the situation under control, the world now has to contend with confirmed cases of B.1.1.529, otherwise known as Omicron, the latest Coronavirus variant that has put countries on red alert and waved in new travel restrictions. Designated by the World Health Organisation (WHO) on 26th November, having been first detected in South Africa and other African countries such as Malawi and Mozambique, how have nations around the world been responding to halt the spread and what is the impact of travel restrictions on global contractors?

The first EU nation to detect a case of Omicron was Belgium whose authorities announced that the affected person had travelled from Egypt. SchengenVisaInfo.com quotes a tweet by Doctor Marc Van Ranst who revealed that the individual returned on the 11th November with first symptoms reported 11 days later. This was followed shortly after by the first two cases found in Germany and one infection in Milan, Italy. Omicron cases have since continued to spiral – and it’s impacting travel options for contractors.

At the time of writing, Denmark has imposed a mandatory 10-day quarantine requirement for anyone who has travelled to Botswana, Eswatini (former Swaziland), Lesotho, Malawi, Mozambique, Namibia, South Africa and Zimbabwe. This has can be reduced if there are two negative test results but these must be taken on days four and six after arrival. Slovenia has followed Denmark’s example, but without the possibility of shortening the quarantine period. Individuals will need to take a PCR test after the 10-day self-isolation. For Hungary, this period has been extended to 14 days.

Many countries have introduced local measures such as obligatory face coverings and working from home to prevent the spread as well as the tougher travel restrictions affecting the freedom of movement for workers and contractors. Lithuania has banned travel to and from the affected southern African countries while Finland is only allowing its nationals to enter the country. Iceland, Poland and Malta have also followed suit. The Czech Republic acted quickly, acknowledging in the words of Minister of Health, Adam Vojt?c “how fast the virus can spread”.

Spain has revised its entry restrictions in the wake of confirmed Omicron cases. The country’s Ministry of Health has also imposed new regulations for individuals returning from Botswana, Lesotho, Namibia and Eswatini – these travellers will have to present a negative PCR or rapid antigen test result within 72 hours of arrival. Now both Finland and Italy are on the country’s risk list – previously this had applied only to some regions only – with citizens of both nations having to provide evidence of vaccination or recovery.

To protect its citizens, Switzerland has further ramped up its travel restrictions, which include tighter rules as of 30th November for those visiting from Canada, Japan, Nigeria and Portugal. The central European country now has two lists to determine the severity of travel restrictions: the first, issued by the Federal Office of Public Health, concerns the 10-day quarantine period for EU and other European countries including the UK, while a second from the State Secretariat for Migration (SEM) bans travel into the country from the affected African countries as well as Israel and Hong Kong.

In other news, the International Air Transport Association (IATA) is concerned about the validity of the EU Digital COVID-19 certificate (EUDCC), more specifically the time from full vaccination to receiving a booster jab – which the European Commission plans to cut to nine months. The IATA fears this will have an adverse impact on the travel and tourism sector recovery, arguing that 12 months would enable more people to access a third booster jab given the rollout speed differences in the EU. CEO Rafael Schvartzman commented, “there must be a joined-up approach that recognizes the impact of divergent policies by individual member states and promotes further harmonization across Europe”.

Coronavirus variants, such as the new Omicron strain, have forced governments and health authorities across the EU to act quickly to minimise the health risks to its citizens. Introducing the wearing of face masks, home working, self-isolation for those who have come into contact with Omicron cases as well as speeding up the administration of booster jabs are some of the measures taken.

A need for compliance

While Covid-19 continues to disrupt travel, contractors working and living in any EU country must still be aware of their tax and legal compliance obligations, and not fall foul of local regulations, which could result in fines or more serious punishment.

Should you require any advice, our 6CATS International experts are on hand to provide you with all the information you need to remain compliant with local laws in the EU and beyond.